You are here: Home / Brands / Volvo / Volvo Safety Obsessions Are Legendary Is This One A Must-Have? 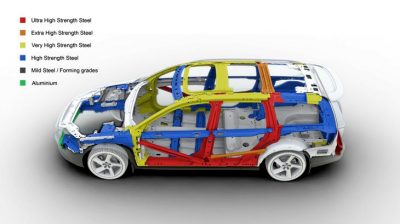 Volvo has been testing several industry-first car safety systems lately. Recently, the automaker announced plans to limit the top speed of its new models to 110 MPH from 2020 and implement technology that can detect if a driver is drunk or drowsy. It’s all part of the automaker’s wider goal to make all its cars death proof by 2020. Now, the Swedish automaker wants to further protect cyclists in accidents involving cars and bikes.

Volvo has teamed up with POC, a leading Swedish sports and safety brand, to conduct a series of world-first crash tests of bike helmets against cars as part of a new research project that aims offer further protection to cyclists. Accidents between bikes and vehicles can often lead to serious injury or death, but Volvo wants to prevent these types of accidents completely with the help of active safety technologies.

For example, Volvo’s Cyclist detection with full auto brake uses the car’s cameras and radars to detect cyclists, warn the driver of an imminent collision and apply the brakes if further action is needed. It is a development of Volvo Cars’ automatic emergency braking and pedestrian detection systems.

Volvo’s latest research project consists of a number of specially designed crash tests at the famous Volvo Cars safety research facilities in Gothenburg, Sweden and is “part of a wider research project to understand the types of long-term injuries sustained by cyclists.” During the tests, POC bike helmets are worn by crash dummy heads mounted on a testing rig and are launched towards different areas of the hood of a static Volvo car, at different speeds and angles for various measurements. The tests are based on existing regulatory test procedures for pedestrian head protection, allowing Volvo and POC to make a direct comparison between wearing a helmet and not wearing a helmet.

For example, Volvo’s Cyclist detection with full auto brake uses the car’s cameras and radars to detect cyclists, warn the driver of an imminent collision and apply the brakes if further action is needed.

The XC40 T5 Twin Engine Plug-in Hybrid is just the latest in our range of electrified Volvo cars. Twin Engine technology delivers a powerful yet efficient driving experience that includes pure electric propulsion, balanced hybrid mode for everyday use and the combined combustion and pure electric power that will change your driving experience forever.

Where does Volvo’s reputation for safety come from?

Volvo cars have an enduring reputation for being safe. In fact, it has become a cornerstone of the brand’s identity. But how did Volvo earn this reputation? At the Wyant Group, we thought it would be a great idea to shed light on why the brand’s vehicles have acquired such a great reputation for safety.

Volvo’s claim that it is one of the safest cars on the road may become even more firmly embedded in the brand’s identity as a result of a new feature that could help occupants of a vehicle survive and accident or, perhaps, avoid serious injury.